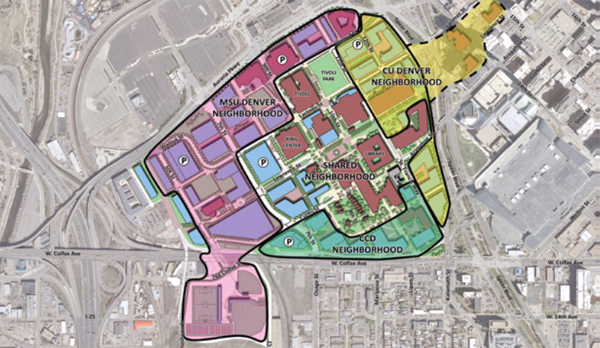 Auraria Campus is making great strides in building on-campus community, forging collaborations and connecting the urban campus and its three institutions – the University of Colorado Denver, Metropolitan State University of Denver and Community College of Denver – with the surrounding city.

During Tuesday’s Board of Regents meeting at CU Denver, in St. Cajetan’s on the Auraria Campus, Barb Weiske, Auraria Higher Education Center executive director, reported to the board on the center’s master plan, including projects underway and those on the horizon.

“One goal under the Denver-area plan is to connect Auraria with Denver and really weave those factions together as part of the urban setting,” Weiske said. “CU has been certainly been instrumental in creating that connection.”

Weiske said the master plan, adopted in 2007, began to conceptualize a concept of campus neighborhoods. Initially, CU Denver was delegated a one-block area in this campus, which at the time was a significant move. Updates to the plan in 2012 were more expansive. “The basis of this adopted plan is an expanded neighborhood concept,” she said. “Neighborhoods for all three institutions grew quite a bit from the original plan. We’ve moved fairly rapidly on the plan.”

The CU Denver neighborhood is bordered by Speer Boulevard. The Auraria Parkway serves as MSU Denver’s front, while Colfax Boulevard does the same for CCD.

In addition to growing the CU Denver neighborhood and the first CU Denver-owned building on campus, Academic Building 1 scheduled to open in fall 2014, advancements that benefit the university include:

Collaborations between the institutions are thriving, Weiske said. The 5th Street Hub student center now houses the CU Denver Sustainable Motorsports Engineering Program. The 4,000-square-feet motorsports research and a development lab is refining a vehicle that achieved 200 mpg and is developing several other efficient race vehicles.

Projected growth for the Auraria Campus is about 10,000 students between the three intuitions in the next five to seven years, Weiske said.

“We’re very proud of the direction this campus is going, certainly, thanks to the collaborative efforts of the three institutions that we work with here,” she said.

The master plan is administered through the Auraria Board of Directors, which was initiated in 1989. CU Denver Chancellor Don Elliman and Regent Stephen Ludwig represent the University of Colorado on the board.