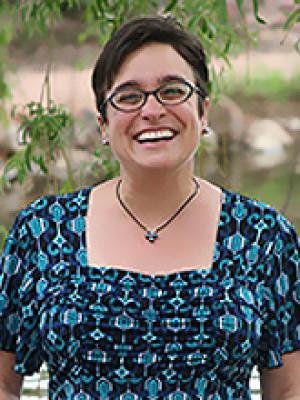 At the age of 16, Rebecca Laroche fell in love with Shakespeare, something that continued into college, so much so that she switched her interests from political science to English. While in graduate school at Yale University, she became particularly interested in women writers in literary history. As she focused on literature from the 16th and 17th centuries, she began researching women’s roles in medicine and found there was, if not parity, at least some equity. There were just as many women in medicine as men, although they were working in different capacities. She authored her first book on the topic, “Medical Authority and Englishwomen’s Herbal Texts, 1550-1650,” in 2009.

That research led her to become a founding member of the Early Modern Recipes Online Collective (http://emroc.hypotheses.org/) and regular contributor to the recipes project (http://recipes.hypotheses.org/). The collective is a group of scholars and other interested people who want to improve online access to historical manuscripts by creating a database for transcribed and annotated texts – including those containing recipes for medicinal purposes.

Laroche, a full professor, has been at the University of Colorado Colorado Springs for 17 years and teaches courses focused on Shakespeare and women writers of the era.

1. How did your interest in women writers evolve into women in medicine and historical remedies?

Women were respected as practitioners. Sometimes these were women of higher economic status who practiced charitably or who were heads of large households. Sometimes women would oversee the health of dozens to hundreds of people. While I was writing my book about women’s ownership of print texts, remedy books started to make their way into my discussion. Women were copying out of print texts into their own remedy books. I made a couple of original discoveries while I was researching at the Folger Shakespeare Library in Washington, D.C., which has one of the largest recipe book collections in the world in English.

They wanted to host an exhibition that would highlight their recipe book collection and they asked me if I would do a proposal to guest-curate that exhibition. I worked on that from 2009 until 2011, when the exhibit opened. That is where my expertise in recipe books and historical recipes was solidified.

I became interested in how Shakespeare plays reflect intimate knowledge of plants in a similar way that recipes do. When I started working on that during a sabbatical in 2012, I realized that there were hundreds of recipe books in the United States and many more in Britain. And we don’t even know how many are in private archives. A conservative estimate is that there are 500 manuscript recipe books dating from 1550 to 1800. To do a broad analysis or generalization of the books, we could only look at a fraction, and then there only were a fraction that we could individually transcribe.

In my travels, I came across a lot of scholars who were working on recipe books. Each of us was transcribing different books and making our own little databases that we would be searching for different kinds of things. But then your question might change and you would have to work through hundreds of thousands of manuscript pages again. Collectively, we came to the conclusion that there needed to be a database that made a connection with and answered the different questions we were all asking.

For instance, we found that some recipes were repeated from one book to another. They might have differences, however, and if you were trying to find out what percentage of recipes that mentioned Dr. Steven’s Water, you were unable to make a generalization based only on what you found.

There were six or seven of us who started this conversation in 2012, and we’ve been meeting monthly since then as the steering committee for the Early Modern Recipes Online Collective. One of the committee members started the recipe project blog series, and that is just the tip of a huge iceberg of research in historical recipes. There are many more people around the world who are interested and involved in the creation of database.

It continues to grow, including in our classrooms. For instance, I started conversations with a couple of graduate students -- one at University of California-Davis and one in Boulder -- and they are working on projects that are recipe-focused. I hope to get their transcriptions into the database right away.

There’s so much work to be done on these texts: working through and contextualizing them; determining where the texts came from, when they were written and who wrote them; and what the networks were and what they were reflecting. This could feed the scholarly desire for something new for quite some time.

2. What is an example of a specific remedy you have researched?

At the Folger exhibition, we highlighted a recipe for “sirrop of violets,” which was used as a beverage and a remedy for coughs and sleeplessness. We made it (see video athttp://www.folger.edu/template.cfm?cid=3728&showpreview=1) to show just what was involved. For instance, we discovered the intensive labor of picking pounds of tiny flowers off the stems that preceded the careful and time-consuming melting of the sugar so as to not boil the flowers. The exhibition was about women’s medical practice as a precursor to the early part of science. Women’s role in early science wasn’t articulated because it focused on men such as Robert Boyle, who did color experiments on the syrup. The syrup is really sweet because it is just sugar and water and violets. If you add lemon or another acid to the syrup, it turns from a deep purple color to a bright pink, and if you add a base to it, it turns green. He was able to distinguish between acids and alkalis by looking at how the syrup responded.

3. What was the most interesting recipe you found and how did these recipes get passed around?

I’ve actually published on one recipe that another researcher and I found while annotating a memoir that was found at the Princeton University library a year or two ago. The memoir is from a woman who came from a family of women practitioners, and discusses how she also became a medical practitioner. She writes that when she was 12, she was experiencing leg pain. It was probably what we call growing pains. She found a bottle of “Oil of Swallows” that had been made by her great grandmother and used it.

I thought the remedy might be made from a plant called swallowwort, but my colleague had seen recipes that called for “feathers and all.” We did an analysis of this very popular recipe, which was rubbed on sore muscles to lessen pain. Some of the recipes say to take “20 quick swallows,” which means live birds, and beat them in a mortar with about a dozen different herbs. That was part of the confusion: Most of the recipe contained herbs and how could you keep 20 live birds in a mortar? But in looking at the recipe history, it becomes clear that you take 20 baby birds and beat them to death. We felt a sense of horror and wondered how to talk about how women were making this. The memoir gives testimony that the recipe was made and that it worked. That is one of the things that can be frustrating when working with these recipes because people wonder if they worked. But why would you beat 20 live birds if it didn’t work?

There is another reason why we want a database. All kinds of innovations were made to the recipe over time until the 18th century, when the recipe begins to disappear. People actually stopped making it and instead bought it at apothecaries. (For more on Oil of Swallows, seehttp://recipes.hypotheses.org/330)

Some people might dismiss the recipe or call it witchcraft, but I like to tell my students this story: I was talking about my work with a massage therapist. I told her that Oil of Swallows lessened muscle pain and she told me about a recent phenomenon of people using ostrich oil to do the same thing. And she said it works.

The recipes were passed around in many ways. They were sent in letters, especially between family members. We have lots of letters that would have recipes in them from family members who sent them to others who were in places where there was plague. In other cases, it was clear that the practitioner was standing over the shoulder of the person writing. There is a kind of orality to the prose, a kind of testimony that is going on. Other recipes clearly were copied out of print texts and circulated. In some cases, there were testimonies in the books about who had made the recipe and whether it had worked or not.

One of the things we have found is that recipe books were given as gifts. You can imagine that a newlywed wife or husband would get a book with the best recipes from somebody in their family or an acquaintance who was a known practitioner. There is a text by someone named Mistress Corlyon at the Folger that has a near duplicate in London. Perhaps she hired a scribe to copy it or maybe she did it herself. It is her entire medical practice and these texts were given to people she deemed worthy recipients.

There also are texts that were an accumulation of familial experience. Some pages are written in one hand, other pages in a second hand, and yet other pages were written in a third hand. These were passed from generation to generation or within a household.

4. What would you consider a favorite aspect of your work?

The thing that comes to me immediately is having curated the exhibition at the Folger. Writing my book was great, and I love the conversation that I’ve entered as a result. I feel as if I have so much momentum right now. But as of now, the exhibition was a high point. It changed my relationship to work and made me more of a public scholar. I didn’t anticipate that happening when I signed on to do the exhibition.  I’ve given lots of public talks and have become a public voice in a way that I haven’t done before. That’s really powerful and humbling at the same time.

5.  Do you have other passions outside of English literature?

My second passion after Shakespeare is birdwatching. I’m still in the beginner phase. I’ve been birdwatching for about six years, and anyone who is a birder knows it is a lifetime thing. When I’ve been birding with people who have been doing it for 30 years, it’s humbling – and inspiring. I see how I could spend a lifetime doing this. When I was 16, I had the same feeling about Shakespeare. It’s a gift to have two passions in my life; some people can go through life and never find one. I feel really lucky that one of my passions is my job. That’s pretty awesome.