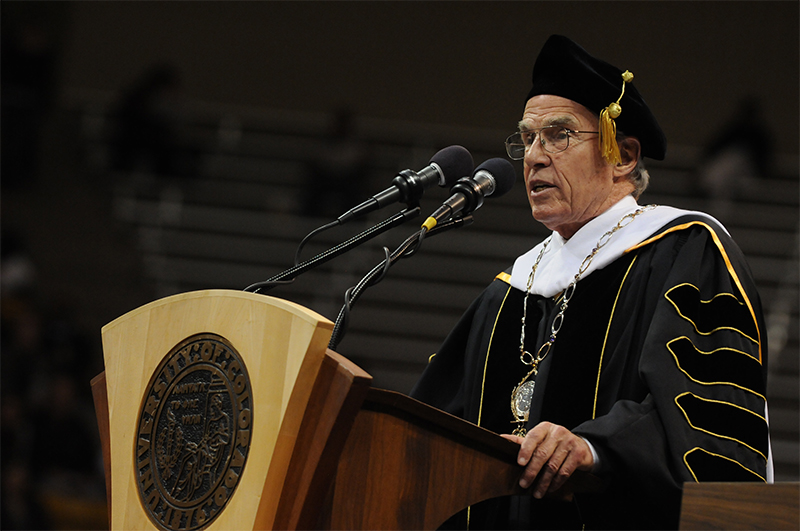 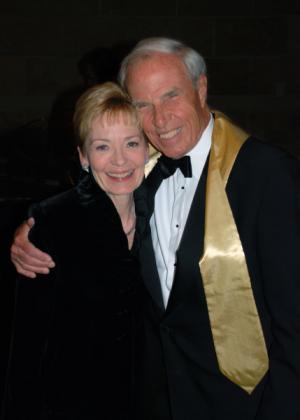 This month marks Bruce Benson’s 10th anniversary of becoming president of the University of Colorado, the institution where he earned his degree and which he long supported while working in business, philanthropy and civic leadership.

He is the longest-serving CU president in 65 years. With Benson at the helm, CU has notched considerable gains in enrollment, degrees awarded annually, research funding, annual fundraising, annual budget and more – all at a time when state funding is down from a decade ago.

When asked, he’ll reflect on the past decade, but Benson remains focused on the future and continuing in his current role.

1. What are you most proud of from your decade at CU?

First and foremost, changing the culture at the university. And by culture I mean all those things that contribute to and support our learning and research environment – how we exemplify our values and ensure our campuses live up to higher education’s ideals, how we develop and deliver our academic programs, how we improve our business practices, ways we innovate and seek efficiencies, how we foster diversity, the ways we convey our contributions and value, how we promote and protect our reputation.

I’m really proud of how the university community has stepped up in so many ways to ensure that we have the kind of culture that drives our success. When I first started 10 years ago, we had people turning down grants because they didn't want to partner with others in the CU system. Early on, I heard loud and clear that people were drowning in red tape from policies and procedures. We talked about free speech and the open exchange of ideas, but we didn’t always practice it. That’s all changed. I see lots of great collaboration across CU. I see us working hard with the Legislature to pass bills that allow us to operate more efficiently and effectively. I see the number of policies reduced from 210 to 89. I see steady progress in diversity and the inclusion of diversity of thought in our discussions and actions.

Mostly, I see a culture that allows us to meet our mission and serve our students and state.

I’m also proud of our reputation. It wasn’t the best in the years before I started, but we’ve made it a priority to address problems immediately. We certainly will have our share of problems with such a large organization, but it’s how we deal with them that matters. I think we’ve also done a good job enhancing our reputation simply by telling our story better.

2. What don't people know about CU that you'd like them to know? 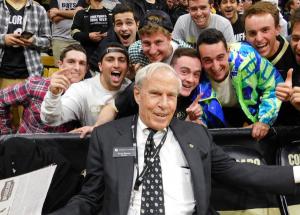 All the great things we do. It’s staggering to see the scope and extent of our university, and just how big of an impact we make. We change individual lives through the education we provide and I see that at every commencement. But we also conduct more than a billion dollars’ worth of research that improves lives, saves lives and helps society. I want people to know the great things happening with our research and teaching. It’s everything from unlocking the secrets of Alzheimer’s disease to students controlling satellites in the remote reaches of space. It also ranges from addressing big global problems like cybersecurity to local issues like designing better playgrounds for community schools. There are thousands of great examples.

I also want them to know the significant impact we have across Colorado. When I started, I suggested we compile a list of the programs we have in communities around the state. I expected a few dozen. Turns out we have nearly 300, which are detailed in our CU for Colorado initiative.

One of the things we’ve done to help spread the word is create the CU Advocates program, a network of 3,000 people who help tell our story and advocate for the university. If members of the CU community aren’t members already, I would encourage them to join at CU.edu.

We have also been spreading the word about CU through earned, owned and paid marketing. We’re in a competitive environment for the best students, faculty and staff, not to mention resources, so it’s imperative that we convey our value and contributions. We’re working hard at that through our All Four marketing campaign, and I think it’s paying off. We’ve done polling and seen our approval rating increase from 68 percent to 75 percent in a short time. I expect that to rise even more.

3. What are the most important issues facing the university? 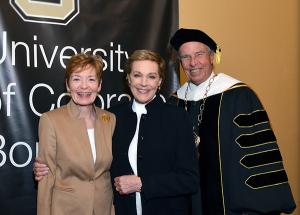 Funding is always going to be front and center. We are slated to get a significant increase this year from the Legislature, but we’ve had some lean years over the past decade in terms of state funding. When I started, CU got about $228 million from the state. As the recession progressed, that dropped to $144 million in 2011. We’ve rebounded to $194 million this year, but we’re still far off where we need to be, particularly considering inflation and enrollment gains. We work hard with legislators, but their hands are tied by conflicting knots in the state constitution.

We have to control the things we can control, like operations and fundraising. We’ve done a great job at being more efficient. One of our big successes has been working with the Legislature over the past decade to secure nearly 20 pieces of legislation that allow us greater efficiency – it’s everything from procurement to capital construction, and it makes a big difference. We’ve also done things like institute self-insurance, which saves millions. We have saved tens of millions of dollars over the past decade with our focus on efficiencies. In the past three years alone, we have realized $112 million in savings and cost avoidance.

We’ve also changed our fundraising operation, aligning responsibility with authority so that we have greater accountability. Fundraisers are now closer to the school or college they’re charged with raising money for. The new structure has helped us step up our activities, and it shows. A decade ago we raised $135 million. Last year we raised $386.3 million and I fully expect we’ll pass $400 million this year. Importantly, our endowment has doubled in the decade, from $640 million to $1.3 billion. We’re still a long way off from where we need to be, but we’re headed in the right direction.

4. What has been more valuable in your job, your business experience or your political experience? 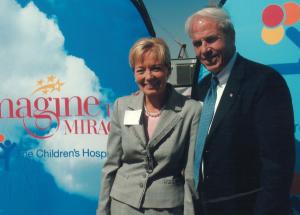 Both are important. We’re a $4 billion-plus annual operation, so it’s critical that we operate as efficiently and effectively as possible. We’re not a business that sells widgets, but we are a business that has to be efficient to allow us to deliver on our mission. My experience as a businessman helps me view the university through a lens of an efficient and effective organization, and act on that every day.

But I think one of the things that has helped me most is being involved and engaged in Colorado and with CU over a number of years and leveraging connections that help the university, whether through fundraising, at the Legislature or working with communities around the state.

5. What would you like to be remembered for when you eventually leave CU? 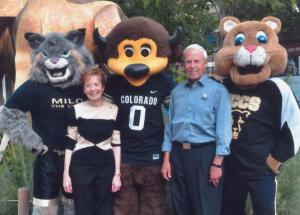 In part, for changing the culture, which I touched on in the first question. But also for putting our university on sound footing, whether cultural or financial. When I started in 2008, we were headed into the Great Recession, and I’m proud of how we weathered that and came out the other end as a stronger institution.

I’d also like to be known as someone who furthered intellectual diversity, political diversity. Our Center for Western Civilization, Thought and Policy is a great example of how we have walked the walk on intellectual diversity. I expect that will be a lasting legacy for all of CU – that we’re a place that fosters free speech and lives up to the ideal as a marketplace of ideas.