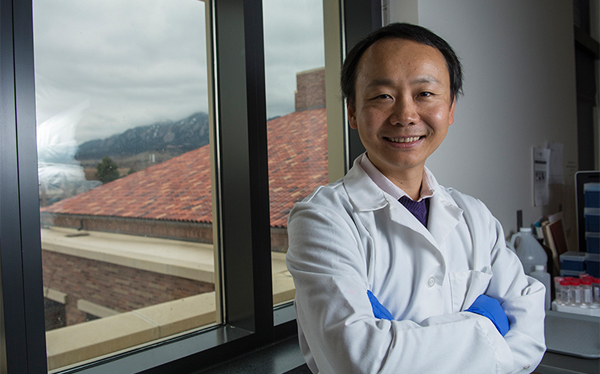 If you believe the common adage that you are only using 10 percent of your brain, while the other 90 percent remains untapped potential, you are about to be surprised.

For example, microglia, a type of specialized immune cells, were originally thought to just connect neurons and hold them together. These cells are found all over the brain and spinal cord, responding to damage in the brain and nervous system. While neurons are constantly taking in information about your environment, microglia are hard at work sampling their own environment, patrolling for anything that looks out of place. 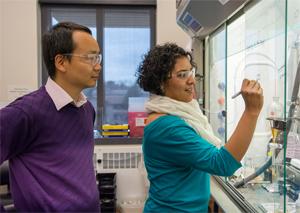 Hang Hubert Yin with Rosaura Padilla-Salinas, a postdoctoral associate in his lab.

BioFrontiers Institute faculty member Hang Hubert Yin, an associate professor of chemistry and biochemistry, is eager to tap into that other 90 percent of our nervous system that we’ve been wondering about.

Besides helping protect our brains and nervous system, microglia play an important role in the inflammation that accompanies any damage to your brain. In some cases, though, microglia overreact to perceived damage to the brain and nervous system, introducing inflammation where it should be controlled. Many diseases are associated with these misguided microglia, including Parkinson’s disease, Alzheimer’s disease and Amyotrophic lateral sclerosis (ALS) or Lou Gehrig’s disease.

Yin is looking at the role of toll-like receptors in microglia so that he can find a potential cure for these neurodegenerative diseases. Finding a drug that can stop inflammation in the nervous system is no small feat. The blood-brain barrier is highly effective in keeping out anything foreign, including drugs that might be helpful. There are a few TLR1/2 inhibitors in development as drug candidates including RNAs, polypeptides and antibodies. However, none of these biologic drugs can cross the blood-brain barrier to work in the central nervous system due to their large sizes. Yin’s team found a small molecule drug that can penetrate that barrier.

“We used the High-throughput Screening facility at the BioFrontiers Institute to screen 15,000 different compounds to identify a novel chemical entity,” Yin said. “Biological drugs for toll-like receptors exist, but can’t get past the blood-brain barrier, limiting their applications. Ours is the first small molecule that can be used as a specific inhibitor for TLR1/2 in the nervous system.”

In a new paper published in Science Signaling, part of AAAS Science Journals, Yin and his collaborator, Kathy Maguire-Zeiss of Georgetown University Medical Center, describe a new TLR1/2 inhibitor that was used to better understand the cellular processes of Parkinson’s disease. The inhibitor, called CU-CPT22, is a potent, “drug-like” small molecule suppressant of the TLR1/2-mediated proinflammation signaling. Developed at CU-Boulder by the Yin team, CU-CPT22 binds with toll-like receptors 1 and 2, preventing them from overreacting and causing protein misfolding in the nervous system. The small molecule blocks the receptors and fine-tunes the system, balancing out the overprotective microglia and keeping inflammation at bay. Preventing this inflammation might be the key to controlling neurological diseases like Parkinson’s. CU-CPT22 was recently licensed to Brickell Biotech and commercialized by EMD Millipore, Sigma-Aldrich and Tocris for drug development and research purposes.

“This is exciting for us,” Yin said. “We are suggesting an entirely new strategy for treating Parkinson’s disease – one that we think will be more effective, and one with a potential therapeutic that patients may access in the future.”

The Science Signaling paper is online as is the accompanying podcast.