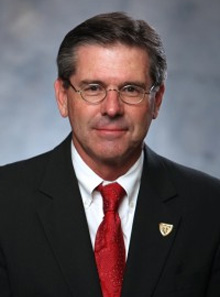 University of Colorado Colorado Springs Athletic Director Stephen Kirkham will be inducted into the Hall of Honor at Colorado Mesa University (formerly Mesa State College) in a ceremony in Grand Junction on Sept. 30.

Also being inducted during the ceremony, which will be held at Colorado Mesa’s University Center Ballroom, will be the Mavericks’ 1982 football team. Kirkham coached the school’s women’s basketball teams from 1988-2004, amassing a 299-157 record. He retired as the most-winning women’s basketball coach in Mesa State College and Rocky Mountain Athletic Conference (RMAC) history. Including stints at the high school and junior college levels, as well as one season as the interim coach at UCCS, Kirkham’s career record is 438-254.

“It is an amazing honor for a first-generation college graduate who never intended to coach women’s basketball,” Kirkham said. “I immediately think of all the great ladies who played at Colorado Mesa University during my 16 years there and their dedication, effort and ability.

“I smile a lot thinking also of their personalities and the experiences we shared. It was a terrific journey.”

In his 16 years at the helm he had a 100 percent senior graduation rate and numerous National Academic Top 25 teams. Kirkham was instrumental in increasing female participation in Mesa State Basketball Camps from 800 to more than 2,000.

Tickets for the event will go on sale Sept. 1 and can be purchased at http://www.coloradomesa.edu/ or by calling the alumni office at 970-248-1871.

Rokos to retire after 2021 season

George one of four ADs to present on leveraging climate action