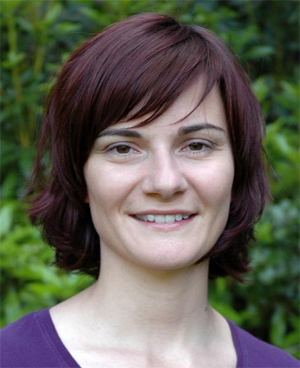 Gordana Dukovic, assistant professor in the Department of Chemistry and Biochemistry at the University of Colorado Boulder, is one of 126 people in the United States and Canada who has received a prestigious Sloan Research Fellowship for 2014. The award includes a two-year, $50,000 award.

Awarded annually since 1955, the fellowships are given to early career scientists and scholars whose achievements and potential identify them both as rising stars and the next generation of scientific leaders.

Dukovic’s research focuses on fundamental problems in nanoscience and how they impact the harvesting of solar energy. Her lab is particularly interested in the design and synthesis of novel nanomaterials and their interactions with light that have applications for solar fuel generation.

In 2013 Dukovic was named a Beckman Young Investigator by the Arnold and Mabel Beckman Foundation, one of only seven early career faculty members in the chemical and life sciences area to receive the honor last year. The award will provide up to $750,000 over four years to support Dukovic’s research on new materials for solar energy harvesting.

The Beckman Young Investigator Program is intended to provide research support to the most promising young faculty members in the early stages of their academic careers in the chemical and life sciences, particularly to foster the invention of methods, instruments and materials that will open up new avenues of research in science.

Last year Dukovic was named a Cottrell Scholar by the Research Corporation for Science Advancement headquartered in Tucson, Ariz. She was one of only 13 early career faculty in the physical sciences and related fields to receive the award in 2013. Cottrell Scholars receive $75,000 each in recognition of their scientific research as well as their dedication to teaching.

In 2012, Dukovic received a Faculty Early Career Development (CAREER) Award from the National Science Foundation. The award is one of the highest honors given by NSF to early career university faculty in science and engineering, and is intended to advance the development of their research and careers. Dukovic was awarded $600,000 over five years.

Dukovic’s research also is being funded by grants from the Air Force Office of Scientific Research, the U.S. Department of Energy Office of Science and the American Chemical Society.

Dukovic received her doctorate from Columbia University in 2006 and was a postdoctoral fellow at the University of California, Berkeley, from 2006 to 2009 before joining the CU-Boulder faculty.

Tagged:
Department of Chemistry and Biochemistry