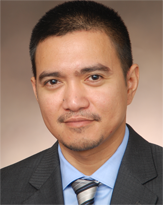 Mario Santiago, an assistant professor in the Division of Infectious Diseases at the School of Medicine, has won the 2012 ICAAC Young Investigator Award designated for a researcher working in the area of HIV.

Santiago’s work varies from field-based HIV epidemiology studies to manipulating innate immunity in his efforts to explore innovative new ways to approach the challenge of the HIV vaccine.

Santiago graduated from the University of the Philippines magna cum laude with a bachelor’s of science in molecular biology and biotechnology. He then worked on schistosome and malaria vaccines as part of the NIH-sponsored Tropical Medicine Research Center in the Philippines and on HIV-1 molecular epidemiology as a Fogarty AIDS International Research fellow at Brown University. Santiago went on to receive his Ph.D. in Microbiology under Beatrice Hahn at the University of Alabama-Birmingham, where he developed noninvasive methods to detect Simian Immunodeficiency Virus in wild nonhuman primates, eventually leading to the discovery of the origins of HIV-1 and HIV-2 in wild chimpanzees and sooty mangabeys, respectively.

"During his tenure, he painstakingly designed, tested and optimized strategies to noninvasively screen fecal and urine samples from wild monkeys and great apes for simian immunodeficiency viruses, which aided in our breakthrough understanding of the origins of HIV-1 and HIV-2," explains Hahn. "These findings resulted in fascinating high-profile publications and have revolutionized our perspective on the AIDS pandemic."

After receiving his Ph.D., Santiago completed two postdoctoral fellowships, first at the University of Alabama-Birmingham, then at the Gladstone Institute for Virology and Immunology at the University of California, San Francisco, where he discovered that a long-sought classical resistance gene that modulates the retrovirus-specific neutralizing antibody response known as Rfv3 corresponds to an innate immunity gene known as Apobec3.

In 2009, Santiago joined the Division of Infectious Diseases at the University of Colorado Denver l Anschutz Medical Campus. He continues his work on the interplay between innate retroviral restriction and adaptive immunity in mice, monkeys and humans, with a conceptual focus on HIV vaccine development, host genetics of retrovirus resistance, and interferon-based antiretroviral therapy. He currently supervises a post-doctoral fellow and three graduate students from the immunology and microbiology programs, where he holds adjunct appointments.

"Santiago's recent work on the function of human Apobec3 has helped delineate potential genetic mechanisms behind the production of neutralizing antibodies to HIV, which are critical to preventing HIV infection," says nominator Thomas Campbell, University of Colorado, Denver. "His research findings will help to inform the discovery of HIV drugs and vaccines. “

Are the COVID-19 vaccines good news for cancer care?

Johnson to be featured in ombuds webinar Tuesday