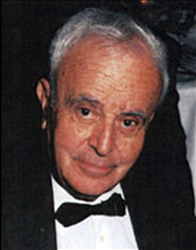 Stephen Alexander Fischer-Galati, Distinguished Professor Emeritus in History at the University of Colorado Boulder, died peacefully on March 10, 2014, in Boulder. He was 89.

Born in Romania on April 15, 1924, to Dr. Theodore and Cecilie Fischer-Galati, he escaped the country with his family during the early stages of World War II, finishing his high school studies in Andover, Mass., before attending Harvard University, where he received his A.B. (1945), M.A. (1946) and Ph.D. (1949) in History. In an English class at Harvard, he met his future wife, Anne D’Esterre Pratt. They were married on January 20, 1951. Daughter Wendy was born in Boston and daughter Nancy in Detroit.

In 1967, Stephen conceived the idea of founding an international journal as a means of providing a channel for the resumption of serious research and meaningful dialogue among scholars East and West, through publication of significant contributions to the field of East European history, sociology, economics, literature and other social sciences. For the following 42 years, nearly 1,000 articles by scholars young and old from throughout the world appeared in the East European Quarterly under his editorship. In 1970, he entered into collaboration with Columbia University Press to distribute the East European Monographs series devoted to scholarly studies on, or related to, East Central and Southeastern Europe. The East European Monographs now comprises over 800 volumes produced by members of the international intellectual community. His own research and publication record is equally prolific: Stephen authored more than 250 articles and contributions to books, and authored or co-authored over 15 books.

Stephen received many honors and awards for his scholarship, including Doctor Honoris Causa from Maria Curie-Sklodowska University (Poland, 2006) and the University of Craiova (Romania, 1994); Guggenheim Fellowship; Carnegie Endowment for International Peace grant; and several National Endowment for the Humanities research grants. He was a member of the Hungarian Academy of Science and the Romanian Academy. His highest honor was being awarded the Harvard University Graduate School of Arts and Sciences Centennial Medal in 2010, for his “lifelong commitment to chronicling the history of East and Central Europe, tireless support of junior scholars in the field, and remarkable legacy as a scholarly publisher.”

Stephen was an avid bridge player, a fierce proponent of the net game in tennis and table tennis, and a knowledgeable opera fan. He once stumped the Metropolitan Opera’s Saturday Matinee Radio Broadcasts expert and won himself a nice set of records. He was a world traveler who spent countless hours studying train, plane, and boat schedules – only Antarctica remained an unvisited continent.

He is preceded in death by his parents, Theodore and Cecilie, and brother Marc. He will be greatly missed by his wife of 63 years, Anne; daughters Wendy Focht and Nancy Tyson; granddaughters Elizabeth and Lindsay Focht; niece Ann Cecilie Fisher-Galati, and loyal cadre of former students who know him as “the Chief.”  Please visit www.cristmortuary.com to see Stephen's online memorial and share your story. - See more at: http://www.legacy.com/obituaries/dailycamera/obituary.aspx?n=stephen-fischer-galati&pid=170123186&fhid=6726#sthash.6UvWIzBs.dpuf