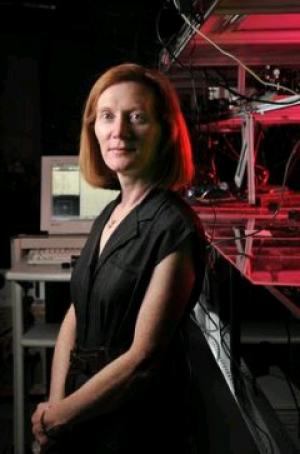 Murnane, a fellow at JILA – a joint institute of CU-Boulder and the National Institute of Standards and Technology – and professor in the physics department, is the fourth CU-Boulder faculty member to be elected to APS. There were 34 people worldwide elected in 2015 to the society, which was founded in 1743 in Philadelphia by Benjamin Franklin, who later became its first president.

Murnane is known internationally for her research – much of it with her husband and colleague, JILA fellow and CU-Boulder physics Professor Henry Kapteyn – which includes conducting optical and X-ray science using tabletop light sources. The group develops new ultrafast laser and coherent X-ray sources as part of its research in optical sciences, using the light sources for new experiments in physics, chemistry, materials science and engineering. Ultrafast coherent X-ray beams are expected to be indispensable tools for scientists in developing practical nanoscale machines.

Murnane is the recipient of dozens of national and international awards. She has been elected to the National Academy of Sciences and the American Academy of Arts and Sciences and was awarded a John D. and Catherine T. MacArthur Fellowship or “genius grant” in 2000. Murnane and Kapteyn shared the 2010 R.W. Wood Prize from the Optical Society of America.

APS promotes knowledge in the sciences and humanities through excellence in scholarly research, professional meetings, publications, library resources and community outreach and has played an important role in American cultural and intellectual life for more than 250 years.