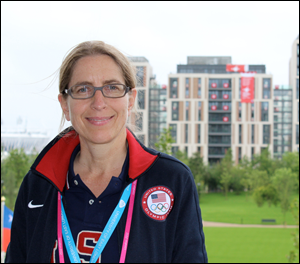 Meyer at the 2012 London Games

As most of the world prepares to be spectators for the Winter Olympics in Sochi, three with University of Colorado Colorado Springs ties are actively involved in the Feb. 7-23 global sports event.

For months, Nanna Meyer, associate professor, Beth-El College of Nursing and Health Sciences, has been working with Olympic athletes -- specifically the members of the speed skating teams -- as a nutritional consultant. She is joined in Sochi by Darrin Steele, instructor, College of Business. Steele is the chief executive officer of USA Bobsled and Skeleton. He teaches part-time in the UCCS Sport Management Program.

For Meyer, Sochi is the culmination of months of preparation. As a nutritional consultant, Meyer is an integral part of the strategy to create champion skaters. She works to ensure the athlete’s diets prepare them for success.

“They are pushing physiological limits,” Meyer said. “Their diet is an important part of making them successful.”

Some male, long- track speed skaters consume as many as 6,000 calories daily, triple that of the average man, she said. Meyer will oversee meal preparation in Sochi. She also works with team members throughout the year to teach them how to cook for themselves. She arranges for farm-to-table foods to be used in cooking and even assists with special diets for those who get colds or flu.

The road to Sochi and the Olympics is a long one. Last month, Meyer was in Italy and Germany for pre-stage camps and made two previous trips to Sochi as part of preparations. Meyer plans to blog from Sochi. Her posts will be shared in Communique.

Steele competed in the sport of bobsled for five years before becoming the CEO in 2007. His career highlights are a 12th place finish at the 1998 Olympics in four-man bobsled and ninth in the 2002 Olympics in two-man bobsled with driver Brian Shimer.

Since 2010, Steele has taught part-time in the Sports Management Program. He is also a doctoral student in the College of Education.

The opening ceremony will have special meaning for many including Mike Hiskey, assistant professor adjoint, Department of Chemistry and Biochemistry. Hiskey helped with the formulations used in the pyrotechnics that will be used at Sochi as well as at the Super Bowl.