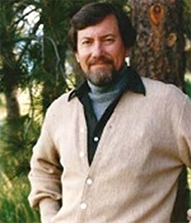 From the College of Liberal Arts and Sciences at CU Denver:

He came to CU Denver in 1982 as Vice Chancellor for Academic Affairs. After completing his term in that office, he worked in his home department (Geography and Environmental Sciences) as Professor of Geology until his retirement in 2007. Jack, a graduate of the University of Wisconsin, was a geophysicist and geologist who lived or traveled in some fifty nations, and conducted geological, geophysical, and geographic explorations in the Arctic, Canada, Chile, and Antarctica.  As a member of the Antarctic Victoria Land Traverse in 1959-1960, Dr. Weihaupt’s eight man team consisting of American, Dutch, French, and New Zealand mountaineer scientists, was commissioned by the United States National Science Foundation to conduct a four month 2,400 kilometer journey into the unexplored hinterland of East Antarctica.  As a result of that exploration, Dr. Weihaupt, with his colleague Dr. Frans G. Van der Hoeven of The Netherlands, is credited with the discovery of the 400 x 1200 kilometer Wilkes Subglacial Basin.  Dr. Weihaupt is also credited with the discovery of the Wilkes Land Gravity Anomaly, potentially the largest meteorite impact crater on the planet.  On the basis of ice cores recovered by Dr. Weihaupt and Dr. Van der Hoeven, their team member and colleague Dr. Claude Lorius of France, now a Member of the French Academy of Sciences, is credited with providing the first scientific evidence for Earth’s contemporary global warming.

Dr. Weihaupt and his team are also credited with the discovery of the Outback Nunataks, the USARP Mountain Range, and the upper reaches of the 200 kilometer long Rennick Glacier in Antarctica.  In addition, Dr. Weihaupt and his Antarctic team are credited with the first ascent of Mount Welcome, a mountain discovered by them in East Antarctica.  In a later exploration, Dr. Weihaupt was the first to successfully determine the thickness of the continental ice sheet at the South Pole, and was the first to determine the nature of the gravity spectrum of the Antarctic continent.  In addition, he is also credited with the discovery of the Orontius Finaeus map of 1531 which has resulted in a three century revision in the historical record of the time of discovery of the Antarctic continent.   For these explorations and discoveries a mountain in Victoria Land, Antarctica, Mount Weihaupt, was named for him by the Advisory Committee on Antarctic Names.  He is also the recipient of France’s Expéditions Polaires Françes Medal awarded by Paul-Ä”mile Victor, is recipient of the Antarctic Medal, the Madisonian Medal, and a number of military medals (Korean War), and holds commissions as a First Lieutenant (Combat Engineers, Infantry, U.S. Army) and as a Captain (Naval Intelligence, U.S. Navy). Dr. Weihaupt, the great nephew of Colonel George Rogers Clark and his brother Captain William Clark, was also an Astronaut Candidate in the early years of NASA’S space program, is a Senior Fellow of the Geological Society of America, and is a Fellow of the Explorers Club.

Since his retirement in 2007, Dr. Weihaupt had continued his research, publishing a number of papers and books. At the time of his death he and his coauthors were completing three manuscripts, two of which have been accepted for publication. Jack is survived by his wife Audrey.

If you’d like to learn more about Dr. Weihaupt’s adventures in his own words you can read more here:  http://connections.cu.edu/news/five-questions-for-john-weihaupt/