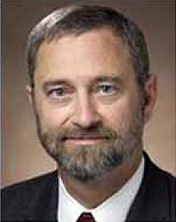 James Kelly, M.D., is on a leave of absence from the clinics of University of Colorado Hospital on the Anschutz Medical Campus and is now in Bethesda, Md., where he will help lead the fight against the signature injuries of modern American warfare.

Kelly is director of the National Intrepid Center of Excellence (NICoE) at the National Naval Medical Center, which works to diagnose and treat soldiers returning from Iraq and Afghanistan with traumatic brain injury and associated disorders, including post-traumatic stress disorder (PTSD).

“There’s essentially nothing equivalent to it in the country at any of the academic centers,” said Kelly, who was a professor of Neurosurgery and Physical Medicine and Rehabilitation at the School of Medicine. He’s a top concussion expert, a former neurologist for the NFL’s Chicago Bears and co-author of the sports concussion guidelines of the American Academy of Neurology.

He was asked to lead the nascent NICoE in 2008, just after becoming the first chairman of the Defense Health Board’s Traumatic Brain Injury External Advisory Subcommittee for Military Clinical Care, Research and Education.

The patients who began arriving at the center from the front lines eight months ago face much steeper challenges than dinged linebackers do, though.

“It’s not just TBI (traumatic brain injury). These people come back with a combination of concussion and stress reaction, sleep disturbance, substance abuse and chronic pain,” Kelly said. “They’re coming back with problems we’ve never even seen before.”

Athletes with concussions don’t suffer from PTSD or emotional trauma, Kelly said. They usually just want to get back on the field. “It’s completely different when you’re blasted into a building and your buddy’s blown to pieces,” he said.

A 2008 Rand Corporation Study, “Invisible Wounds of War,” estimated that, of the 1.64 million service members deployed in Iraq or Afghanistan through October 2007, roughly 320,000 had suffered a TBI, and 300,000 were suffering from PTSD. Treating TBI alone was costing the military between $600 and $900 million a year, the study estimated.

After 42 years of deadlines, Curtin to retire