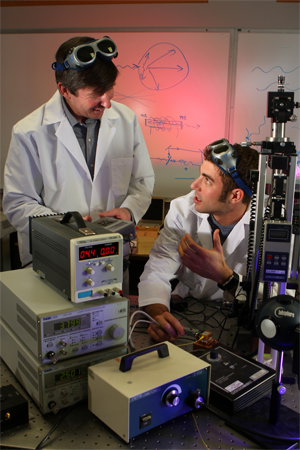 A team led by Michael Larson, El Pomar Endowed Chair of Engineering and Innovation at UCCS, has developed a laser-based device for closing wounds during nasal surgery that circumvents several technical hurdles.

Now a company that he formed, Tissue Fusion LLC, and the CU Office of Technology Transfer recently completed a license agreement that will allow the company to continue developing the device for use during surgery.

The two most common nasal surgeries are septoplasty, the repair of deviated or deformed septum, and rhinoplasty, commonly known as a nose job. Currently, wounds are closed during these surgeries using staples, sutures or intranasal packing, all of which can be dangerous and uncomfortable for the patient. After the procedure, techniques such as stapling or suturing can cause infection, scarring or other side effects.

Lasers have been used for decades in place of scalpels to cut tissues in procedures such as LASIK eye surgery. Lasers also have the ability to weld tissue together, but have not been widely used in this capacity due to the complexity of the laser and the exceptional surgical skill required to use them.

The device generates heat and pressure to fuse tissue membranes together, but is designed specifically for use in septoplasty and rhinoplasty, using pre-set parameters to make the device easy to use by a surgeon or a trained medical technician. In addition to making the surgical procedure faster and simpler, the fusion device also has the potential to shorten healing time and reduce side effects such as swelling, scarring, and infection.

Tissue Fusion is currently gathering data on the efficacy and safety of the device in controlled trials. The company will use the results in seeking approval from the Food and Drug Administration for clinical use in procedures related to the ear, nose and throat. Ultimately, the company hopes to introduce additional surgery-specific devices. Further research by Larson’s team shows that the technology holds promise for spot welding layers of tissue in a range of surgeries, including microsurgical applications.

“We’re pleased to be working in partnership with the University of Colorado to commercialize a new medical technology that is already adding jobs to the Colorado economy,” said Larson, who also serves as the company’s CEO.