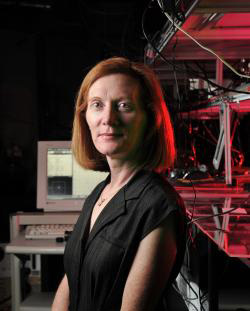 Margaret Murnane, a Distinguished Professor at the University of Colorado Boulder who has spent decades developing faster and more powerful laser systems, recently was named the winner of the 2011 RDS Irish Times Boyle Medal for Scientific Excellence from the Royal Dublin Society and The Irish Times. She will receive the honor and EUR 20,000 (about $28,300) during a ceremony in Dublin, Ireland, this month.

The judges praised her work, saying her super-fast laser systems represented outstanding research that would have a major impact on research activity in other disciplines. She is only the second woman to receive this award; the last woman won the award 50 years ago.

“I am deeply grateful to be honored with this award,” said Murnane, who co-leads a research laboratory with her husband, Henry Kapteyn, at JILA. “I am certain that I would not be where I am today without the love for learning instilled through the strong education I received in Ireland through my primary, secondary and university years. It makes it even more significant for me to learn that I am only the second female laureate in the medal’s history, following the footsteps of another woman who fell in love with science.”

Murnane is originally from Limerick, Ireland, and attended University College Cork, completing a bachelor’s and master’s degree in science before earning her Ph.D. at the University of California, Berkeley, in 1989.

Since then, she has conducted research into a range of laser systems and has developed some of the fastest lasers in the world, as well as table-top laser that uses X-rays instead of colored light to project a beam, something that could be used to image atoms or study a virus.

Murnane has won awards and fellowships throughout her career and was selected as a member of the U.S. National Academy of Sciences in 2004. She was named a fellow of the American Academy of Arts and Sciences in 2006, before joining the President’s Committee for the National Medal of Science in 2010.

The RDS Irish Times Boyle Medal for Scientific Excellence is Ireland’s premier prize for scientific endeavor. It is awarded every other year, alternating between a researcher of any nationality who conducts their research in Ireland, and then an Irish-born researcher who is living and working abroad. The medal is named after one of Ireland s greatest scientists, Sir Robert Boyle, often referred to as the father of modern chemistry.