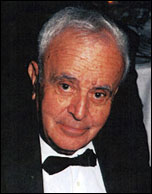 Stephen Fischer-Galati, Distinguished Professor Emeritus of history at the University of Colorado at Boulder, is one of four Harvard alumni who recently received the Harvard Graduate School's highest award, the 2010 GSAS Centennial Medal for his "lifelong commitment to chronicling the history of East and Central Europe, tireless support of junior scholars in the field, and remarkable legacy as a scholarly publisher, whose works populate the world's great libraries."

Fischer-Galati is the founder, publisher and was principal editor for more than 40 years of the scholarly journal East European Quarterly. He also is founding editor of the scholarly series East European Monographs, which has put out nearly 800 scholarly books on East-Central Europe in collaboration with Columbia University Press.

Galati is one of the world's foremost specialists on East European history and civilization, exploring the evolution of East-West relations and the intersection of Western and Eastern political and cultural developments. He also has published extensively on Balkan issues and guerilla warfare in the region.

Born in Romania, Galati escaped the country as a teenager during the early stages of World War II, finishing his high-school studies in Massachusetts before going on to Harvard. His books include "Romania: A Historic Perspective;" "Eastern Europe and the Cold War: Perceptions and Perspectives;" and "Man, State and Society in East European History," and he has authored more than 250 articles. He holds several honorary degrees and major grants and fellowships from American and international scholarly foundations. He also is president of the International Commission of East European and Slavic Studies of the International Congress of Historical Studies.

"There are those people who spend all their lives doing their own writing and their own work, and there are others who share," says Roman Szporluk, Harvard's Mykhailo Hrushevs'kyi Professor of Ukrainian History, Emeritus. "Stephen is one who shares. He was an inspirer, and an organizer, and a mobilizer of others to produce work that would be of lasting significance."