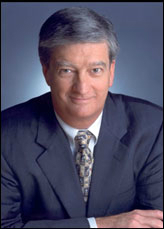 Preston Padden, executive vice president for government relations for the Walt Disney Co., will join the University of Colorado at Boulder in the fall as an adjunct professor in the Interdisciplinary Telecommunications Program and as a senior fellow at the Silicon Flatirons Center.

Padden, who recently announced plans to retire from Walt Disney, has been a regular speaker at the center's conferences since 2000, discussing piracy and media regulation. He will participate in a Jan. 31-Feb. 1 Silicon Flatirons Center conference, "The Digital Broadband Migration: Examining the Internet's Ecosystem."

Dale Hatfield, adjunct professor of telecommunications and interim director of the center, said he expects Padden will co-teach a course on new media and cable television in the fall.

"Preston understands the media business probably as well as or better than anyone in the U.S.," Hatfield said. "We've been talking to him for a long time about coming to teach at CU."

Padden joined Walt Disney Co. in 1998 after serving a year as president of the ABC television network. Prior to that, he was president of network distribution for the Fox network and part of the original team that created the fourth broadcast network. He holds a law degree from George Washington University and a bachelor's degree in economics from the University of Maryland. His son, Joseph, lives in Boulder.

"We are pleased that Mr. Padden will be teaching part-time at the University of Colorado," said engineering Dean Robert Davis." To have an individual with his extensive practical experience and record of achievement join our faculty is of tremendous benefit to our students."

The Interdisciplinary Telecommunications Program, which is hosted by the College of Engineering and Applied Science, is the nation's oldest and one of the most prestigious graduate telecommunications programs in the world. For more than 35 years, the program has educated leaders who can bridge the engineering, business, economics, policy and legal fields.