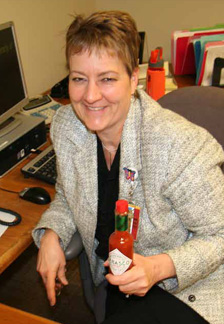 Victoria Franklin, the director of Food and Nutrition Services (FNS) at the University of Colorado Hospital, is a native of New Orleans and a third-generation restaurateur. She comes to UCH from the University of Rochester (New York) Medical Center, where she served for three years as senior multiservices director. Despite her roots in a region of the country considered a mecca for serious restaurateurs, Franklin doesn’t regret her decision to get out of the notoriously competitive and time-demanding job of pleasing retail customer palates. Instead, she’s found satisfaction – and success – in the institutional food service world.

“I knew I didn’t want to do restaurants,” she said. “Restaurant life is hard. I wanted something that would allow me to serve people and use my clinical knowledge as well as my retail/restaurant and know-how – and something that also did not normally require getting home at 2 a.m.”

“I made the decision because (UCH is) a hospital connected to a university,” Franklin said. “And because of its growing reputation in the area.” Having kids and grandkids up the road in Fort Collins didn’t hurt, she admits, but the opportunities for success at a “renowned institution” drove the final decision.

Franklin says UCH’s inpatient room service – food temperature, timeliness of meal delivery, meal quality and so on – has room for improvement. “Ours is not functioning at the level that it should,” Franklin said. “And room service is what drives patient satisfaction.”

An important key to improving patient satisfaction, she believes, is increasing employees’ engagement with their workplace and their managers. That’s another area she says she’ll stress heavily.

“During the past three to six months, the FNS team has done an incredible job working on cleanliness and organizational opportunities with our staff, as well as making some major improvements in food quality,” she said. “We’re not good yet at recognition and rewards. When employees do good stuff, we need to let them know they’ve done a great job. That will enhance their ability to do their job better.”

Also on Franklin’s lengthy to-do list is continuing to upgrade the hospital’s retail cafeterias. The effort already is well under way with the addition of healthier food choices and a greater variety of menu items. She also wants to cementing FNS’s relationship with the hospital’s inpatient nurses, with whom the department works closely. She plans meetings with each nurse manager starting in January.

Reaching out is nothing new for a woman who has worked in communities stretching from the adobe houses of Los Cruces to the Ute Reservation near Cortez to the feedlots and rodeos of Greeley to Denver’s northern suburbs.