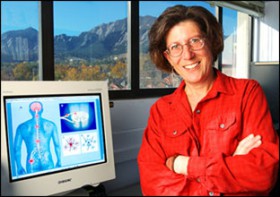 Linda R. Watkins, distinguished professor of psychology and neuroscience at the University of Colorado at Boulder, has won Spain's Prince of Asturias Award for Technical and Scientific Research.

The award, announced this month, recognizes Watkins' groundbreaking work in understanding the mechanisms and potential control of pain. She shares the 2010 award with two other leading pain researchers, University of California physiologist David Julius and University of Jerusalem biochemist and geneticist Baruch Minke.

Working independently, the trio has "discovered, from complementary approaches, the causes and mechanisms via which pain is produced and perceived, as well as other sensations such as cold, heat and taste," the Prince of Asturias Foundation stated.

"I am deeply honored to be selected for this prize, with my co-recipients Dr. Julius and Dr. Minke," Watkins stated. "There are numerous people who have importantly contributed to the understanding and recognition of glia as powerful modulators of pain and opioid actions, both within my laboratory and beyond."

Watkins and her colleagues are striving to develop new drugs that enhance the ability of opioid drugs to treat pain, while decreasing negative side effects such as tolerance, dependence and addiction.

The Asturias prizes, which will be formally awarded in the autumn, include a stipend of 50,000 Euros and a sculpture by artist Joan Miro. The Prince of Asturius Foundation bestows eight awards annually to encourage and promote "the scientific, cultural and humanistic values that form part of mankind's universal heritage."