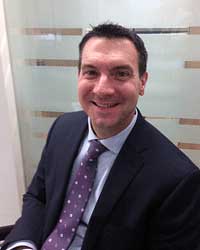 Following a national search, the University of Colorado has named Scott Arthur as vice chancellor for advancement at the CU Anschutz Medical Campus, a role he began last week.

Arthur brings 15 years of experience as a fundraising leader at major medical institutions and nonprofits. Most recently, he has been vice president of constituent giving at the Nationwide Children’s Hospital Foundation in Columbus, Ohio, the fourth-largest children’s hospital in the United States. There, he led a major-giving program that increased giving nearly 400 percent in two years.

Arthur also has co-founded a nonprofit to instill business skills in inner-city youth and directed a capital campaign at a Columbus, Ohio, school.

“It is hard not to get excited about the future of the Anschutz Medical Campus and the role philanthropy will play in its evolution,” Arthur said. “Big ideas create great opportunities for community support, and CU Anschutz is not short on big ideas.”

At CU, Arthur will be charged with leading a team of about 35 fundraisers and support staff, with an annual goal exceeding $55 million.

“It is a great pleasure to welcome Scott to the CU Advancement team,” said CU Denver Chancellor Donald Elliman.

Arthur received a master’s degree in nonprofit management from Case Western Reserve University and a bachelor’s degree from Otterbein College. He and his wife, Tricia, are both runners, and they have three boys, Jackson (7), Sullivan (5) and Anderson (1).